My Son And Grandson 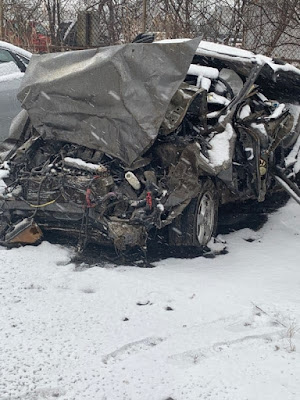 As I told you my son and grandson were in a car accident. This is the car.

My son was cut out of the car. Then they dragged my grandson through the driver's side of the car.
Both were unconscious.

He has had 4 surgeries to repair and anchor bonnes in his limbs. One wrist and one ankle required surgery. He is full of metal plates and screws.

My son was in ICU for a week and a half. He is beginning to mend.

My grandson was taken to the same hospital as my son. Once he was stabilized they transferred him to Children's Hospital. Even though he is bigger than a lot of men he is only 14 years old. His bones are still those of a child.

He had five breaks in one leg. Five hours of surgery and a metal plate and a bunch of screws later his leg is mending. He also has several compression fractures in his back. Several bones in his foot were broken and there is a pin to stabilize his toe.

My grandson has begun his physical therapy. He hopes to be out of the hospital in a couple of weeks. His MMA instructor is planning to supplement physical therapy with keeping his upper body exercises.

As you can see they are both lucky to be alive. Remember to let the people you care about know you love them. You just do not know when something terrible might happen.

I will still be mostly absent from blogging. Some things are more important.
Posted by Emma Springfield at 4:00 AM