2019 was a good year for me. I have a roof over my head and plenty to eat. I have clothing appropriate for each season. I have heat when it is cold and cooling when it is hot outside.

I am healthy. I have a way to get myself where I need or want to be. I have family I love and who love me back.

When I was asked before Christmas what I wanted I realized that I have pretty much what I desire. I have a good life.

For you I wish a prosperous, healthy, and very Happy New Year.
Posted by Emma Springfield at 4:00 AM 19 comments:

The Ghosts of Christmas Past. 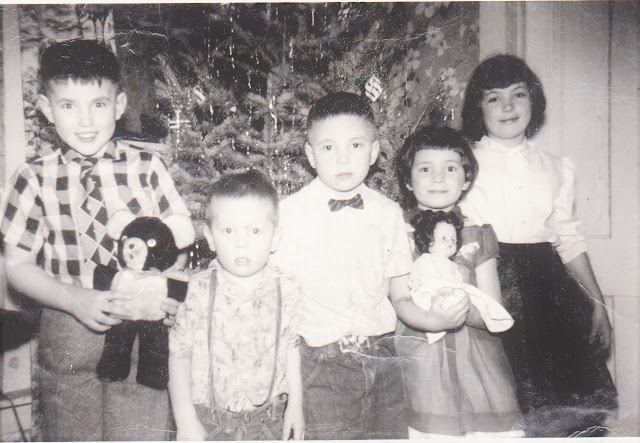 There were five siblings in 1957. From left to right:

Merry Christmas to all.

Posted by Emma Springfield at 6:00 AM 28 comments:

To Give; To Get


Christmas is approaching. I have sent off all the gifts that need to be sent. As a matter of fact, my sister who is in a nursing home because of a stroke has already opened hers.

I love Christmas. I suppose it may be that my family did not have much money. We could not afford birthday gifts for instance. We did get to choose our birthday dinners.

At Christmas, my parents went all out. Santa always left us nice toys.

Giving gifts has always been my favorite part of Christmas. Choosing just the right gift for each person and watching delighted faces as they open them gives me such joy.

Of course, I would feel a little silly if I did not receive a gift too. In my life, I have received a lot of wonderful gifts.

A good one was my first watch. It was a sign of being more mature and I was glad to be recognized that way. The problem was that it felt hot on my arm. I told my mother and she explained that I would eventually get used to having it on my arm.

After complaining several times I finally had proof that the watch was hot. It had burned me and there was a big blister where the watch had been. My father took it back to where it had been purchased. They examined it and found that a tiny drop of oil that should have been there to lubricate the moving parts was missing. I got a new watch and no further problems.

Probably my favorite gift was from a man I was seeing a few years after my husband and I divorced.  He bought several small gifts in size. He wrapped them each separately and placed them in a quilted tote bag which he also wrapped. The gifts were all nice but what I really loved was opening all those small packages. I really am like a child I guess.

The favorite gift I ever gave was to my grandmother. I was in the second grade. We had been working with modeling clay. I made the bust of a woman. It reminded me of Grandma when it was done. I gave it to her for Christmas with the provision that I get it back when she died. (Children are so tactful.)I checked on my "Grandma" every time we visited her. When she died an uncle and his family quickly cleared everything from the house. No trace of "Grandma" was ever found.

Out of all the wonderful gifts you gave or got what were your favorites?