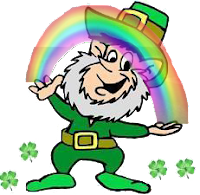 La Fheile Padraig, or as we say in the United States... Saint Patrick's Day, celebrates the life of St. Patrick in Ireland. Now I do not promote any religion or lack of religion. However, after that disclaimer, I think the fellowship of St Patrick's Day is fun. On this one day of the year everybody can be Irish.

St Patrick was not Irish. He was born into a


wealthy family in Briton. At the age of 16 he was captured by Irish raiders and made a slave. As a slave he tended sheep in Ireland. That is where his appreciation of nature began. Being alone with nothing but sheep and the predators he had to save them from, he had a lot of time to learn about the world around him.

After 6 years, he managed to escape his captors and went back to England. He became a priest and eventually managed to convince his church to send him back to Ireland. There he used the things he found in nature to teach the people about his religion.

It has been said that St Patrick drove the snakes out of Ireland. For those who take this statement literally, that is a falsehood. There is no evidence that there have ever been snakes on this island. But the pagans of the area were represented as snakes and that is what St Patrick tried to drive away.

St Patrick used the shamrock, a three-leafed clover which had previously been sacred to the Druids, to explain the aspects of his god. It was a visual aid that made sense to the people. When St Patrick died on March 17, the Irish people chose that day to celebrate his life. And in the Irish way, that means a party.

Now I have a few fun "facts" about St Patrick for you.

In Ireland, the potato crop was traditionally planted after St Patrick;s Day.

According to legend, St Patrick asked that on judgement day, he be allowed to judge whether the Irish are worthy of heaven.

Every year between 40 and 100 pounds of green dye are dumped into the Chicago River for St Patrick's Day.

In the custom known as "drowning the shamrock", the shamrock that has been worn on a lapel or hat is put in the last drink of the evening. If it stays floating while you drink your beer, you will have a prosperous year.

Many cities paint the middle line of their streets green to mark the St Patrick;s Day parade route.

Cities all over the world have parades to celebrate the day. One of the shortest St Patrick's Day parades is in Hot Springs, Arkansas.

An Irish toast: “St. Patrick was a gentleman, who thru strategy and stealth
Drove all the snakes from Ireland, Here's a toasting his health
But not too many lest you lose yourself and then
You forget the good St. Patrick and see those snakes again.”

On St Patrick's Day, people drink green beer and wear green clothes. Anyone not wearing green might get a pinch.

Now everybody grab a leprechaun, have a green beer, and dance an Irish jig. And always remember...

Slainte!
Posted by Emma Springfield at 6:00 AM